The Day They Hanged A Banker

How callous would you have to be to invent a country just to lure paying settlers there? Especially if you told them it was an idyllic paradise for Europeans when it was nothing more than an Equatorial mangrove swamp that actually already belonged to someone else? This con man devised a name for the country, and printed banknotes too. He even produced a guide book for the poor dupes that sailed there to their death.

How about the respectable bank who knew that one of their customers was a crook but connived with his crimes just to get their money back? That same bank which collapsed ten years later taking the equivalent of billions of pounds of people’s savings with it. How about a chinless Britisher and a larger than life Kentuckian who claimed to have found a field in Utah where the diamonds were just laying around waiting to be picked up? Or the story of the Ponzi before Ponzi — of a young man from Brooklyn who told a few of his friends from church they could make a guaranteed 520 per cent gambling with him on Wall Street and ended up with thousands queuing round the block to lose money with him?These and many more are contained in The Day They Hanged A Banker — and yes, they did hang more than one banker for messing with other people’s money.

Some of the stories in The Day They Hanged A Banker are amusing, some poignant, but each says quite a bit about the unalterable human condition. We were fooled by sub-prime, derivatives and credit default swaps because we have been fooled before, over and over.

The Day They Hanged A Banker e-book is now available from  Amazon, Barnes and Noble, Smashwords and many other fine distributors. 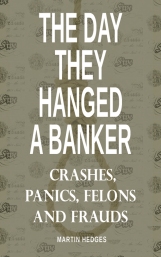 This entry was posted in Uncategorized and tagged 19th century, frauds, history, Martin Hedges, The Day they Hanged a Banker. Bookmark the permalink.