Old Slaughter’s Coffee House; ‘Now among the things that were…’

Thursday March 30 1843 saw the auctioning off of a London landmark just for its building materials. The wildly misnamed and deeply corrupt government department, the Commissioners of Woods and Forests, had bought the site at number 74 St Martin’s Lane. There was not a wood nor forest in sight, but Woods and Forests was conducting a massive programme of bricks and mortar ‘Metropolitan Improvements’ in the ever-expanding western half of London in order to solve its perpetual traffic problem. A coffee shop was being torn down to widen an alley as part of new thoroughfare from Leicester Square across St Martin’s Lane, though the traffic would have to wait a further 30 years before Shaftesbury Avenue was ploughed through the medieval streets.

The coffee shop in question had been famous long before. For a century and more it had been a venue akin to the Algonquin Round Table, the Bretton Woods Conference and the even the United Nations for what its visitors contributed to art, culture, philosophy humanitarianism and social policy. 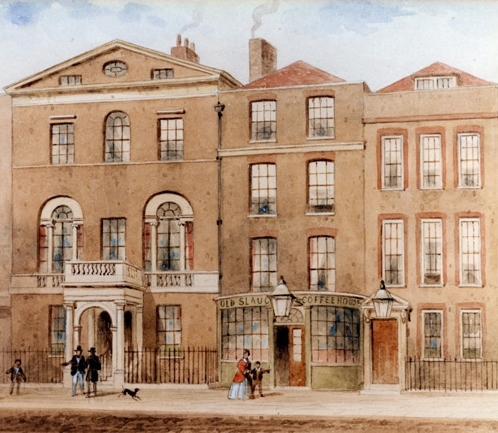 The first issues of the influential magazine The Spectator were written there.

The idea of the Royal Academy was conceived at Old Slaughter’s.

William Wilberforce MP, the frail dynamo who pushed onward the UK’s pioneering position against slavery in its dominions and slave trafficking by other nations called the coffee house his home away from home

In October 1822 the first attempt at animal welfare was decided at the tables of the Old Slaughter’s, when 12 gentlemen voted to form a society ‘for the purpose of preventing, as far as possible, the cruel treatment of Brute Animals’. They had another go in 1824 and that is from that date when the RSPCA (incorrectly, it appears) acknowledges as its beginning.

It became the star of a play. Like many coffee houses, Old Slaughter’s was used as a post box. Job advertisements often stated that the applicant should leave their details in a letter marked with an initial at Old Slaughter’s. It became the plot device of mistaken identity in a farce called X.Y.Z which opened at the Haymarket Theatre in 1818. When Roscius Allaross advertises for an actress and blundering country squire Neddy Bray advertises for a wife, they both ask for their respective applicants to reply at Old Slaughter’s, marking their envelopes X.Y.Z — and you can work out the rest.

For 50 years until 1770 Old Slaughter’s was base to Britain’s first and most respected chess club. It was there in 1747 the best player in England, Sir Abraham Janssen, lost to the world’s best player, Francois-Ande Philidor who was a frequent visitor to Old Slaughter’s.

Benjamin Franklin loved his chess and recommended Old Slaughter’s in a letter. As he lodged a short walk away up the Strand while he lived in London and so he was a certain visitor.

Another chess aficionado was French born mathematician and friend of friend of Newton and Liebnitz, Abraham de Moivre. Aside from his work on analytic geometry and the theory of probability, he became Old Slaughter’s resident maths genius. For money de Moivre would give advice on matters of chance, betting and odds.

The dictionary of National Biography describes an Old Slaughter’s regular, Theodore Gardelle, as ‘murderer and painter’, though surely ‘painter and murderer’ might be a better description as he was doing the painting long before he decided  to murder his landlady, a Mrs King, in her Leicester Square home. Mrs King was described at the time as a ‘gay showy woman of a doubtful character, chiefly visited by gentlemen’. They quarrelled, he pushed her, she kept screaming, he cut her throat. After three days he decided to cut up the body and burn it piece by piece. He was caught. On April 1 1761 his Old Bailey trial began. In his evidence he confessed. By the Thursday he was found guilty and on Saturday we was publicly hanged in Haymarket. One wonders whether Hogarth was looking out the window of Old Slaughter’s when someone sketched Gardelle, prayerbook in hand as he trundled past on his way to the gallows. Though not his work, Hogarth was said to have given strong advice to the artist that improved the finished work.

Its latter days had not been kind to Old Slaughter’s Coffee House. After a golden age when every writer, dramatist, painter and poet had sipped his coffee, Slaughter’s went into decline. To save itself it had amalgamated with the building next door to become Reid’s Hotel, but that had not saved Old Slaughter’s. The whole area was sliding down the social scale. Leicester Square, which was once home to princes and ambassadors, was a fashionable neighbourhood no longer. It was becoming a piece of wasteland edged by dubious lodging houses and low grade places of entertainment, where prostitutes plied their trade. A few hundred yards in the other direction were the rookeries of St Giles and Seven Dials.

Final epitaph in a newspaper put it fittingly “…hardly a more celebrated house of its kind, among those of the olden school, than Old Slaughter’s Coffee House, which is now among the things that were.” 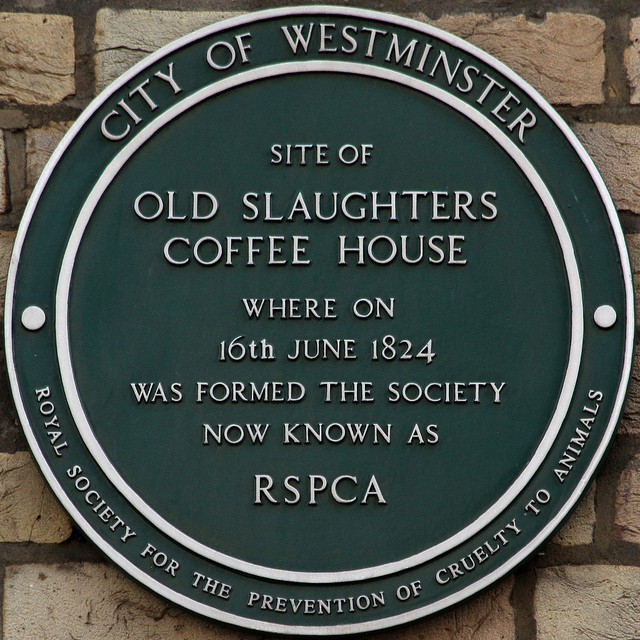 Wrong date, no apostrophe, but otherwise correct in every detail